Get fresh music recommendations delivered to your inbox every Friday.

from Despairitous by Octothorpe and the Aglets 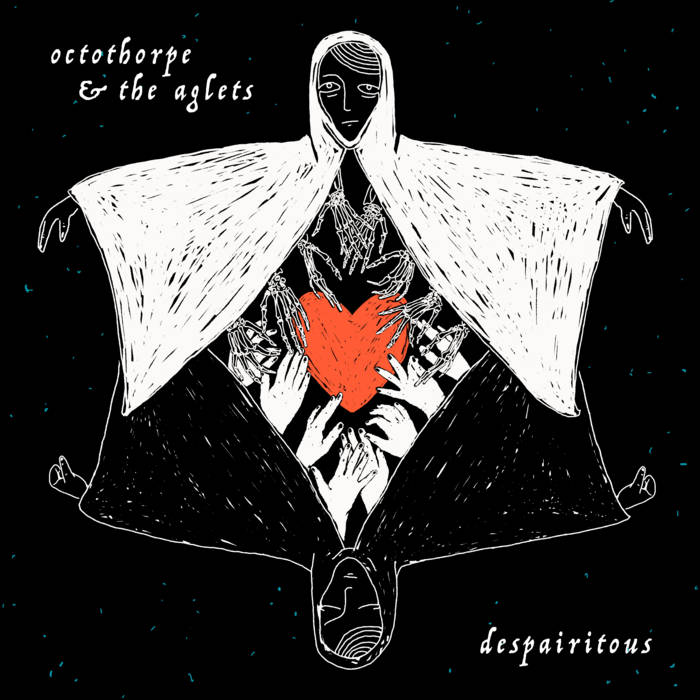 Almost all I know is that the state of the quo seems so static when sinking.
While the water stays stagnant, gravity’s having its fun.
And, although I’ve left the void behind, sometimes I find myself thinking:
“Can the weight of the world be withstood by the will of the one?”

But it takes more than purpose to surface and force yourself up there,
And it’s more than the masses who’ve ravaged the Flowers That Be.
While we wait for the good that we want, ever due poised to outrun any noise we confront, it’s done silently.

(I can admit I’ve spent far too long in the void.)

‘Cause the slights soon spiral in size until they’re unending,
But the lashes only branch out when the wind blows.
Even light can’t make it through a lens without bending.
When descending, at least you're pending repose.

The closed becomes cloudy, you'll notice your body's been breaking down.
Either the dark’s more intense, or your senses have dulled.
Do you fight off the fear with malaise, clinging to sight while your hearing decays?
Time never takes what it’s tolled.

(I can admit I’ve spent far too long in the void.)

Even I can admit I’ve spent far too long in the void:
Swimming around, drinking it down, deadset to drown.

It’s easy to give in – in fact it’s justified to do – and you wouldn’t be in the wrong (if you're someone that that matters to).
‘Cause we’re powerless to transmute it, and we’re not the first t’ve tried, but what malice can you attribute to a boat caught in the tide?

Because what seems intentional is simply three-dimensional
(As if time had the space for such petty displays to displace).
It’s background radiation, expanding without contention,
And it’s seemed like it’s seeped into all that we know, but it’s just the foundation –
Not to mention: the things that we don’t know; the things that we don’t pay attention to;
the things we view as us, if just because we see things through.
But it’s actuall natural, it’s just physics - the off switch - it’s the default setting.
Water down your fed upticks, turn your liches to leeches, unleash the bloodletting go.

‘Cause when you’re tired of being right, when you see such empty vessels, do your best to steer aside.
Even though those objects might look a lot like you, don’t get distracted - it’s a trap! It’s a trick! It’s entropic residue.

I know there seems no way out, but I swear there is.
It’s a long way down, I’m aware of this.
Don't mistake the knave for nefarious.
Don't wait in the grave while they bury us.

It’s just despairitous.
It's despairitous just, and despair: it does what despair it must.

Prepare to push through the precarious.
Trade the timid for temerarious.
Let your visions be vivid and various.

Despair: it does what despair it must.

Tune it out like the dead air it is.
It's archaic to cater to Erebus.

And even when I'm worlds away, the empty tempting void still beckons me.

It’s just despairitous. That’s all it is.

Almost everything I know is still compounded by the cold and unfeeling.
The hope might peal hollow, so long as the sorrow still stings.
But red poppies have been known to grow on ruined walls, and falls tend to turn to springs.
All the rest I know is buried under snow that winter brings.